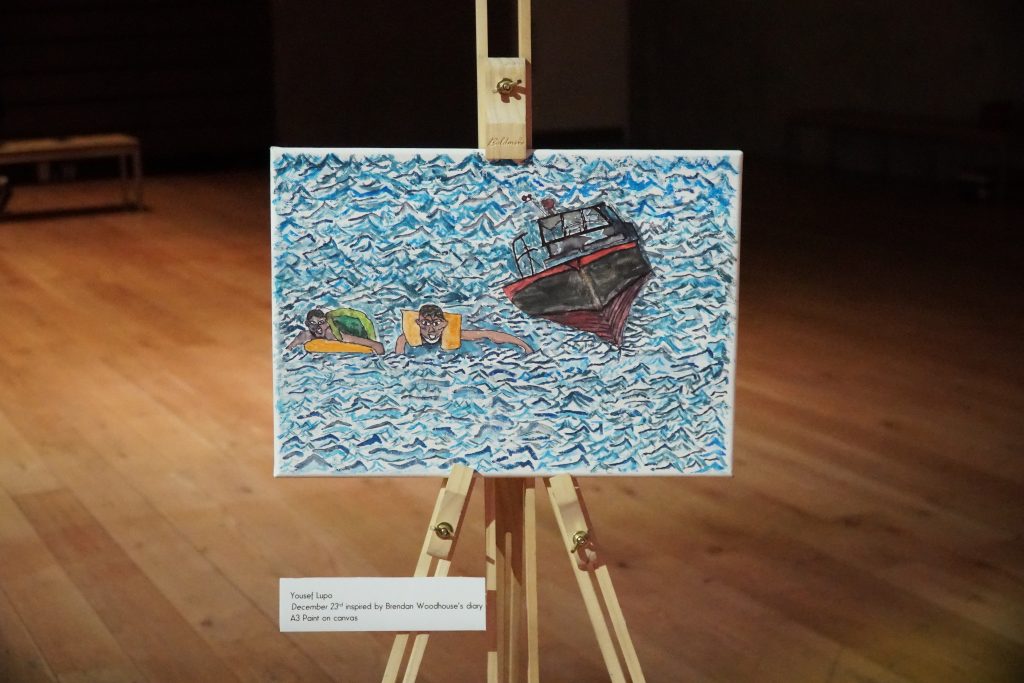 Eight of us were on duty at Karakas lighthouse. I saw what looked like a tiny black dot on the horizon and I couldn’t quite tell if it was a boat. Eventually it appeared closer and I heard the buzz of the engine. I looked out to sea and by that point all the people had turned their torches and mobiles on because they knew that they were out of Turkish waters and into Greek waters. They were coming quickly. All of a sudden, we heard this loud “BOOM!” as the bottom of the rubber tubes of the dinghy hit a rock beneath the waves. Then all the mobile phones and torches went up in the air and you heard all the people screaming. And then silence and blackness as the phones hit the water and were submerged and the people went below. Then everyone appeared out of the water and started screaming. You could hear names being shouted; “Hassan, Hassan!” “Mohammed, Mohammed!”. You could hear babies screaming. You could hear loved ones trying to find each other, worrying that one of them is drowning. It’s a sound that really can’t be described. This was a boat full of families escaping the terror that is happening in Syria, forced onto a boat because no one will help them.

As I was getting closer to the water, I could see with my torch that the boat was snagged around 35 metres out to sea. There were a lot of people in the water and I remember thinking: we’ve got death on our hands today. I stepped into the water and very shortly after I come across my first group of people. There were five of them huddled together in these fake life jackets which would eventually start filling with water and cause them to sink. In the middle of them was a baby boy, the water level was right up to his chin and he was choking each time a wave came over. I remember thinking, that boy doesn’t stand a chance, so I started pulling this little group huddled together back to shore.

I turned around and started swimming back out. I came across a woman who was probably about 70 years old. The lifejacket that she was wearing was fake and not fitted properly – it had ridden up on her because it was too lose, forcing her arms above her head so her face was just above the water. I remember seeing the relief on her face as she thought I was coming to her rescue, then the look of horror as I swam straight passed her, because I could hear the kids instead. I remember making that decision right there, feeling really guilty swimming on but knowing I‘d made the right call. I kept on swimming and I came across the boat that had capsized, still snagged on one of the rocks, although a bit closer to the land. There were about 10 people holding on to it and most of them were under 8 years old. I remember looking at their faces thinking I was going to come and take one of them. Knowing they had something to hold onto, instead I swam under the boat, lifted the rubber tube that was inflated and checked to see if anyone was trapped underneath it. There was nobody.

Above all of this, I could hear this one woman. She was about 50m out to sea facing Turkey, which was about 4-5 miles away. Her arms were outstretched and she was screaming and screaming and screaming, every breath was a scream. A woman who transpired to be her sister was trying to tow her back towards the shoreline, but they were both drifting out to sea. On the other side of them there was a guy pointing out towards Turkey, shouting at me: “Baby, baby!” I looked further on and I could see this sick, twisted, minestrone soup of bags, lifejackets and belongings. Among all of that you could see the sheen of the petrol that was inside the boat. I realised that this woman’s baby was out there. I swam the next 20m and got hold of the very first bag that I came to. Then I thought, this doesn’t look like a bag, and I turned it over. It was a baby. She’d been face down in the water, wrapped in blankets to keep her warm. I start treading water and picked her up. I looked at her face. Her eyes were open but were in the back of her head. Her face was pale. He lips were blue. I had a little hold of her chest and she wasn’t breathing. I put her on my chest and start backstroking. I was pulling the water with one arm and then realised I could start doing fast little compressions with the other arm. Although I’m not a particularly religious guy, right then I was. I remember shouting up at the stars, “If you’re there, you will help me now. Get this baby out of here, she does not deserve this.”

I was almost back at the shore when somebody saw my head-torch and reached, thinking I was going to rescue him. I went underneath the water, breathing in a mixture of petrol and sea water and I thought “I’m gone”. I was underneath the water, so was the baby and I was holding onto her as tight as I could. I wrestled this guy to let go of me, putting my foot on his chest and pushing him away. Then I swam backwards as fast as I could. I reached down and felt nothing. Then I did another couple of kicks, until I felt a rock underneath my toe. I balanced on this rock and my head was just out the water. As a medic and firefighter, I know you should give 5 rescue breaths for infants who aren’t breathing, then commence CPR. So, I went to give these little rescue breaths. I gave one and there was nothing. I gave another and then I saw all the sea water some out of her. She started spitting it up and I saw her eyes start moving again, her face contorted and then she started screaming. That was amazing, the relief. Because I thought I had a dead baby in my arms, every volunteer and firefighter’s worst nightmare.

A volunteer came up to me asking if I’m ok and I said, “Take her, I can’t swim anymore”. I remember looking to the right and seeing another one of the volunteers in the water up to her chest, helping the old lady I had swam past. I looked out and saw a Greek fisherman who had turned up on his boat pulling out those kids off that rubber boat one by one. I could see another two guys searching among all these lifejackets and bags for people. Each of my team, aside from the two firefighters among us, weren’t rescue professionals at all, but they all risked their lives to save these people.

I got myself up and went to the medical emergency room. I went in and a medic was there with the baby, squeezing oxygen into her lungs. I remember looking down and seeing she was wearing a hat and blanket that my little girl had donated. The oxygen and the mask had been donated from Derbyshire Refugee Solidarity, that I had brought over myself. Other people had paid for me to go and for my accommodation. I remember piecing it all together: all these people’s influences, their change from having a pint in a pub, for refugees who they would never see. And I just remember looking at that baby and thinking: all these components that have gone into you, all this love people have got, it’s here right now being used.

Then the baby’s mother came in with her sister. The mother saw us squeezing the bag and was instantly terrified, thinking the worst. She dropped to her knees, shouting “Allahu Akbar” – a way of saying “God help us”. Her sister had her arm around her and they were both hugging each other. I said “Mama” and she looked towards me, I took the mask away and the baby screamed. I said “It’s ok!” and then she cried “Alhamdullilah!” – Praise God – as her tears of despair turned into tears of utter relief.

On the way back, we saw another boat coming. And that’s how it was, it was a crazy time in Lesvos. We found out that of all the people that were rescued that day, nobody drowned. I got back to Stansted airport and was waiting in baggage reclaim with another volunteer who was working for the transport team in Lesvos. Her phone buzzed. It was a message from a friend of ours in Lesvos. “Tell Brendan that little baby Sewin is 5 months old, she is safe and well and reunited with her family in hospital now.” Instantly the tears came.